Hello. Me here, you’ll be pleased to know. I haven’t changed my name or been hijacked, although if I did change my name it would be cool to go by the groovy moniker “Cornelius”.

I’m in a local market town, in my grandmother’s house, feverishly tapping away at a beige keyboard.

Yesterday evening’s Thai meal was a delight. Maybe a review will follow. Or maybe not. I did remember the name of one more restaurant reviewer, at least – Jay Rayner, who I believe looks a bit like some sort of seal or sea monster or something. 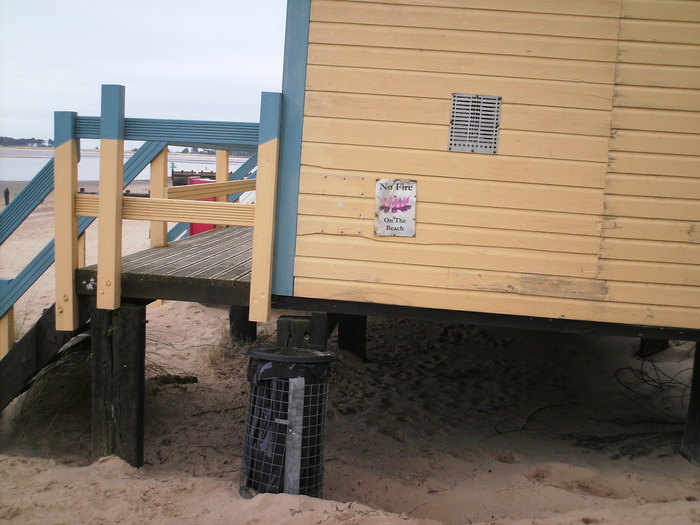 We’ve been to the beach, hence the title of this post – and the picture above, which would be rather cool and ironic and amusing if there was a fire in the foreground. I could superimpose it, I guess. If I cared, I would have gone to the trouble of burning something at the beach, to create the perfect scene, but I don’t care apparently.

My eyes are square – not literally, they’re still strictly speaking eliptical (I think) – from watching Slumdog Millionaire, which is the feel-good film of the decade. You probably guessed this, also thanks to the title.

It’s not the feel-good film of the decade. I haven’t watched every film this decade – no-one has, in fact, for this decade is still slightly young – but I would be amazed to learn that no other film is more “feel-good”.

There were confusing moments. Why was there a curly-haired man in a bath full of banknotes, for instance? But if one ignored the confusion, and flashbacks, and other stuff, and focused on the comprehensible bits, one enjoyed it.

The film is about a chap who wins Who Wants to Be a Millionaire?. It’s sponsored by the people who make that programme, which means that everyone in the film is disproportionately obsessed by it. The only person who isn’t is a nasty man who is not satisfied with his jam sandwich, and furiously switches over to the cricket.

I’ve always thought the Who Wants to Be a Millionaire? music, so very dramatic, deserved to feature in a film, and I was right. The music is all very brilliant, in fact. Well done, musician.

It was a bit like watching a normal episode of Who Wants to Be a Millionaire?, in some ways. Only, instead of the usual fish-scented impotent Chris Tarrant, perched on a stool and twiddling his hands, there was a bloke who looks a bit like that bloke in EastEnders. Every five seconds, the fun was interrupted by something resembling a Sudafed advert – just like in the TV gameshow.

One really annoying, goat-getting, gear-grinding thing is that the camera was often wonky. This was deliberate, I think, although the cameramen may have had dodgy tripods. (Of course, the ironic thing is that the picture above, which I took today, is also wonky.)

So, yeah, it’s a good film. I liked it. It’s probably saved me from a sock-eating sticky end, for now.