Does anyone actually watch such television programmes as Flog It!, and Bargain Hunt?

It would be nice if nobody did. But clearly people do, because the sensible folks of the BBC would not be silly enough to broadcast television shows to a non-existent audience. They wouldn’t, would they? I cannot think of a more horrible and outrageous waste of license fee payers’ money, unless maybe they dressed Jeremy Clarkson in a jumpsuit knitted from Waitrose organic fresh pasta.

The people who watch such unentertaining forms of entertainment are often old ones, who – poor things – have nothing better to do than watch an annoying man in a scarf examining the dusty, unwanted ceramics of the healthy people of Rotherham. Often, I suppose, the televisions will be muted, just on in the background – perhaps the viewer cannot work their lamp, and uses the television to see their knitting. Perhaps the television is in a waiting room, or a dental surgery, or both, or perhaps it’s in the post office or a shop selling televisions.

But surely, nobody actually sits down with a cup of peppermint tea and some biscuits to concentrate on watching a whole episode of Flog It!, or Bargain Hunt, or Dickinson’s Real Deal, or one of those other beastly things? Nobody in their right mind would do such a thing.

Actually, that’s what I did yesterday – with the accompanying snack and hot beverage and everything.

Before you get really worried, I should impress that this was not entirely my own decision. I was with my grandmother, and it would’ve been rude to . But that doesn’t mean I didn’t watch it – I did watch it, with my very own pair of eyes and everything.

It was, suffice to say, not the best television I’ve watched this year. Not the worst either, because I was in the bath during that blasted Piers Morgan On Dubai thing and I suppose overhearing a muffled version of the bulgy-faced prat rhapsodising about Dubai counts as watching it – it’s not too far removed from using a telly that’s been wounded by heavy objects chucked in anger. Because of course, nobody can properly watch Piers Morgan for more than one minute without spontaneously combusting in a ball of rage.

My grandmother did admit that Flog It! is sort of crap. And it is. But, incredibly, that doesn’t make it impossible to try and squeeze some enjoyment out of the show. I didn’t fall asleep.

First of all, there are the scarves. For some reason, the geezers on Flog It all wear scarves. And then suddenly the scarf is gone. And then it’s back again. Not sure why that might be interesting – perhaps it’s the swinging motion of the scarf as its owner moves, which somehow has a bit of a hypnotic effect.

Then, there is something that had my grandmother screaming at the television. “She’s wearing a different jumper! Her eye make-up has changed! He was wearing a scarf!”

It’s true. There is a mysterious thing happening with the “contestants” – their appearances seem to change, and it can be horribly confusing who is who. It’s enough to drive a person mad, it really is. My guess is that it’s something to do with the way the show is produced, but it’s really to boring for it to be plausible for me to even consider giving my hypothesis to those of you who have somehow not yet fallen asleep.

Also, the programme seems to be interspersed with shots of the healthy Rochester, Bolton, Southend or wherever the programme is being filmed today inhabitants doing entirely random things – waving their arms about, picking their noses… odd.

Oh well. Suffice to say, I’m off to arrange my sock collection in order of fibre density. I still haven’t decided whether to do it in ascending or descending order. 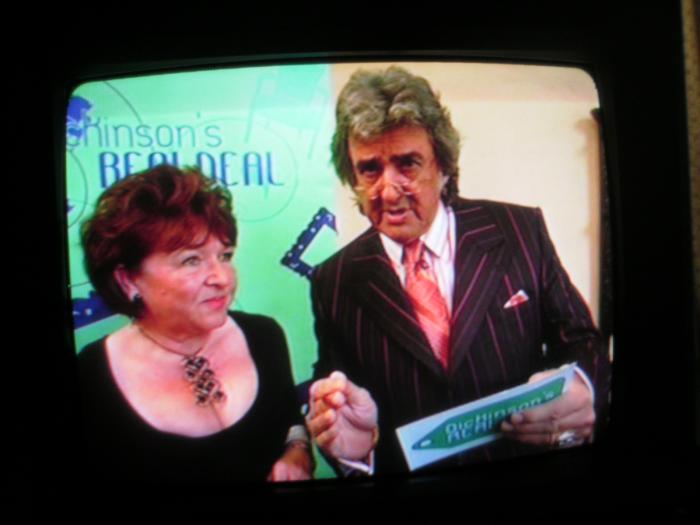 Also, why didn’t David Dickinson’s parents call him Richard? Perhaps he has an older brother.