Monday was a bank holiday.

Being the heroic man of the people that I am, I don’t think the banks really deserve a holiday. The fat cats should be forced to work their nipples off every day of the year, scraping chewing gum from our pavements to say sorry for eating all the fish and crapping in my garden. They’re responsible for the mess we’re in, so the last thing we should be doing is letting them have holidays. It’s even worse than those bonuses. The Whiskas people have the right idea, forcing the fat cats to eat disgusting slimy gooey lumps of fish. You know what I like to call bankers? Yeah, that’s right, “anchors”. Such wordplay, calling people pieces of nautical equipment with which they rhyme, is the most biting form of ridicule.

Of course, though, the bank holiday was not really about banks. It’s a misleading name for the days, I think – whoever decided to call them bank holidays was obviously drunk or something, and I sincerely hope that he or she was forced to eat Whiskas Senior Pouches as punishment for such a cock-up.

What Monday’s bank was really about is this: watching children getting dizzy, burning sausages, and doing DIY, all in celebration of the birthday of one of the most treasured of Britain’s living national treasures. The person I’m talking about is neither Kate Garraway, nor Julian Barratt, but rather me.

Yeah. That’s right. It was my birthday. And you didn’t send me a card or anything, did you? It’s all right, I’ll try to muster up some forgiveness this time around, but next time I want flowers and everything.

Anyway, I’d like to thank my old mate James Gordon Brown – he’s the prime minister or something; I hear it’s a dull gig involving an itchy grey suit and literally tons of potatoes – for arranging this bank holiday. Very kind of him, allowing the people to celebrate the anniversary of my birth however they want by having the day off. It’s an honour. He gets a lot of stick for the economy and all that, but I don’t think he deserves any of it – he’s a lovely bloke. That milk-snatching Margaret Thatcher woman would certainly have never held such a bash – she hid behind the pathetic excuse that I hadn’t been born yet, and that she was too busy farting out racist children. Like I say, pathetic! It’s just pathetic, it really is.

How did I celebrate my birthday? Thanks for asking, mate. I was going to go to Ely. It is a nice place, apparently. I have an irrational hatred of Ely, though. It stems from a few things. It’s the manor of the cousins of a quite annoying and rodent-like person I know, as said person regularly annoys me by telling me. It’s got a rather horrible, sort of slimy, name. I spent far too long stuck there on the way home from Edinburgh last month, my only source of entertainment being the announcer’s mildly evident ambition to become some sort of literary actor performer person, the way that his voice was ever so slightly similar to Loyd Grossman’s. Whenever I pass through on the train, the people look so greasy and gormless and unhealthy and, well, lizard-like. (Please don’t be offended, lizards. Love you really.)

I just don’t like it, OK? And that’s where I was going to go for the day to celebrate my birthday. My least favourite place in the world.

And actually that’s OK, because my hatred of Ely is nothing more than pure, terrible prejudice – the sort of thing that gets people barred from countries was looking forward to visiting the small Cambridgeshire city, because it would perhaps help to destroy my disgusting xenophobic views. I would see that the people of Ely are just normal human beings like the rest of us. They have toilets and underwear and deodorant and soap, and they talk to one another and they hold their cutlery properly.

But notice how I say that we were going to go to Ely. That sort of suggests that we didn’t go there in the end. And that’s exactly right. In fact, we went to the mustard-smeared city of Norwich. Apparently the weather – certainly pretty miserable, and in no way suitable for reclining outside in a deck chair made from truffles glued together using bull sperm – was not good enough to appreciate the beauty of Ely’s architecture. And that’s OK. When I said I was glad to be presented with an opportunity to confront my extreme prejudices against Ely, I was just being optimistic. Once I was aware that we were going to Norwich, I breathed a sigh of relief.

Not the most exciting of times was had in Norwich, but it did the job.

We went to Topshop, a top shop to which I hadn’t been since I was an infant, if ever. It’s a ludicrously hip place, and I felt ever so slightly like a violinist in a jazz band. As I shuffled about admiring the trendiness, and observing the various wankers waddling about, I noticed Ross Kemp. Yes, Ross Kemp. Him off the telly. What are the chances of that? I couldn’t believe my eyes. Ross Kemp in Topshop in Norwich.

The godson and I did not communicate or acknowledge each other. I was in so much shock, at seeing Ross Kemp off the telly on my birthday in Topshop in Norwich, that he had gone before my mind stopped puffing out smoke and I had realised who it really was.

We drank some hot beverages in a place called Caffè Nero, which is not quite as trendy as Topshop. It was creamy. The man behind the counter made quite a lot of fuss about making our drinks – unnecessarily so, I thought. Whenever I need a hot chocolate, all I need to do is go to Caffè Nero. Why did the idiot man at Caffè Nero faff about with milk and multitasking?

Photographic tributes to the blogging godson 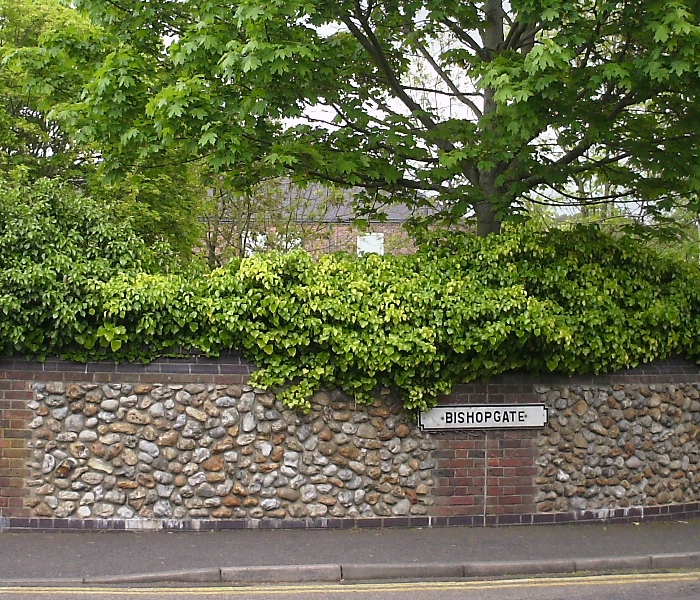 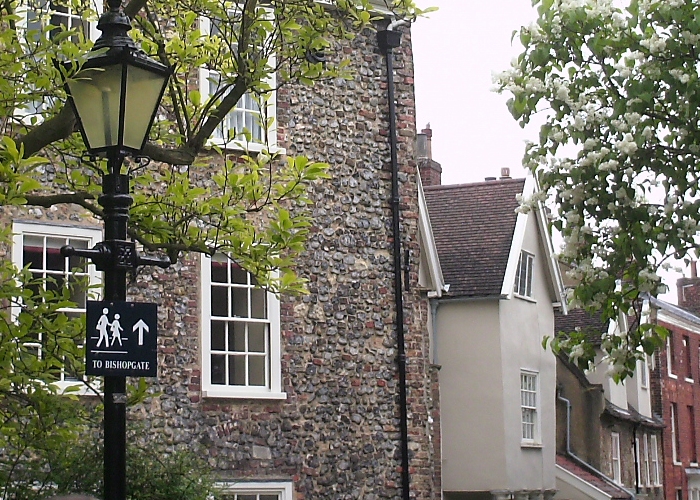 I was most delighted to receive a portable digital media player device for my birthday. Good little beast. It looks all tacky and rubbish in the picture on Amazon.co.uk, but in the flesh it’s actually quite good aesthetically. As well as being incredible overall. Incredible. (Maybe less than an iPod.)

I’m having one or two technical frustrations, but the fault lies with my computer – specifically, it has been happening ever since I installed the webcam driver of my camera – rather than the new gadget. I have emailed SanDisk and, 24 hours later, have had no response. Hurry up, please. It says on the website, “We’d love to hear from ya”, so I assume the delay is because they’re busy sacraficing goats because they loved getting my email so much. Hurry up, hurry up, and tell me whether there is any way to sort out this mess – the mess which I have described in the email to SanDisk, and also described here only to have it disappear thanks to some other gremlins who I’ll tackle in the last paragraph of this blog post.

Even with these niggles, I am in love with it. Last summer, when I was listening to the entire archive of the Collings and Herrin podcasts, I out of curiosity covered my old MP3 player with chalk. As a result it is now as scratched as a hippopotamus’s bum (although it can still be spelt more easily). This is not going to happen with my new Sansa Fuze. I will polish it every night, using a special cloth woven from the nasal hair of Sarah Beeny.

That’s all I’m saying for now. What I’ve said so far is the blogging equivalent of the paltry and mostly-crap songs which come bundled with the SanDisk Sansa Fuze. If someone at SanDisk wants me to say more, they must pay. If money is involved I will quite happily shave my armpit hair into the shape of a Sansa Fuze, in demonstration of my huge affection for the little gizmo.

Well done to the winner of the Good Egg competition for winning the Good Egg competition. Also, commiserations and condolences to the very same person – it’s a crazy world! – for coming last. She was the only person who entered isn’t it. Insane. I came across certain things which could have been entered, but she alone emailed her product to me with some rhubarb in the subject line, and so she was the only person who actually entered the competition for real.

This is a photograph of The Weakest Link, the perfect birthday celebration 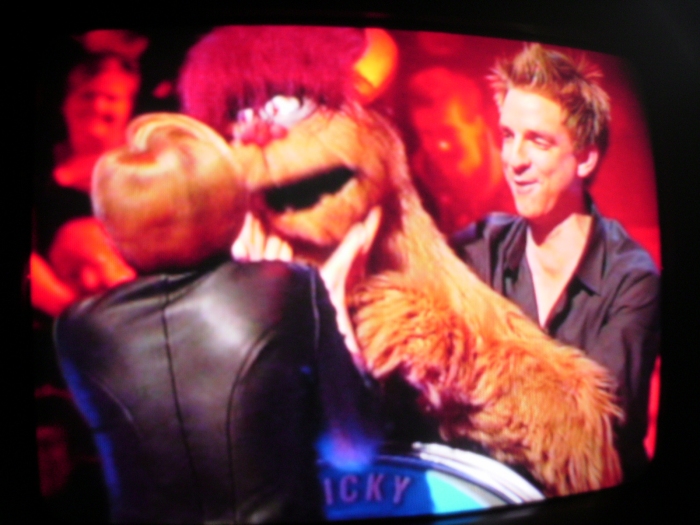 This blog post was a labour of love. It took many attempts. It seems to be cursed. I keep thinking, “oh, I don’t need to save it now”, and then I click on something and then I click on the Back button and all my typing is gone. I have to do all the typing again. Damn Textpattern with its lack of a bloated automatic save feature. If I used Safari, like the Beach Boys do, it would be fine – there’s a feature called SnapBack. But I use Firefox. As do the members of some other band, perhaps, although “Surfin’ Firefox” doesn’t have quite the same ring to it. Obviously they wrote the song and then Googled to find out how to spell Anne Robinson’s name, without thinking to hit Save, incorrectly assuming that holding down Ctrl when you search will open the search results in a new window. The lyrics were lost just like this blog post. And unlike me, they didn’t bother to re-write it. Probably for the best.