Recently I went darting around the top of the weather map. There is a place called Shetland there – it is an archipelago, a cluster of islands – and there is where I was.

The weather consisted mainly of wind – I had escaped the nice weather. Although I had envisaged making do with a combination of a folding macintosh and some jumpers, I was quick to acquire a more capable anorak. It is made of a material named Tres-Tex, which I think is an alternative to Gore-Tex for people who don’t want to empty their pockets into the mouths of Al Gore and Gore Vidal.

It’s a moderately strange, treeless place. One’s definition of a tree broadens greatly, to include dandelions and things. The fences have strands of sheepskin stuck to them, and it makes you wonder what John Motson has been up to, before realising that there’s just a significant population of sheep. 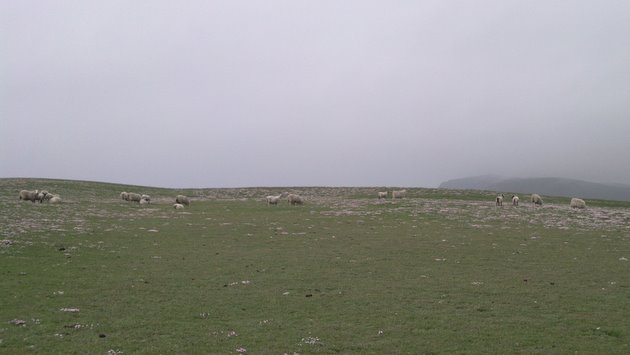 Not just sheep, of course. Cows too, and ponies, and birds, and marine mammalia, and people. There were lots of tourists with polyester jumpers and great big phallic SLR camera lenses and binoculars. (I had binoculars. Binoculars are nice.) There are also people who live there – imagine that! 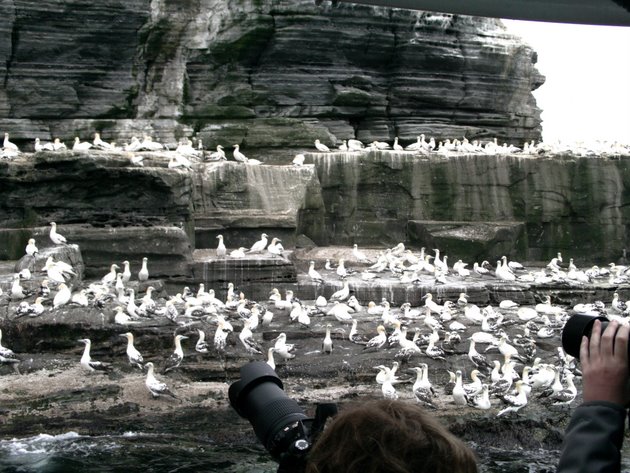 Things are not as primitive as one might rashly assume. They have lots of electronic dot matrix signs, and bus stops, and far too many people have recently registered motor cars – it’s a bit mysterious. The public transport is poorly documented but all right. There was a tremendous amount of going on ferries, which makes sense.

A somewhat famous bus shelter exists – I did not do a photograph of it, because that would have been predictable. Instead I did a photograph of a more normal, uncelebrated bus shelter, a bit like some kind of Wayne Rooney’s wife. Hooray for me, yes. (I will not show you the picture of a bus shelter, because actually it is far too boring.)

There was a settlement called Sandwick. Oddly, I was quick notice the name’s similarity to Sandvik, the Swedish tool company, but less immediately linked it to “sandwich”, even though fewer letters are different and I have more affection for sandwiches than tools.

If the experience has taught me one thing, it’s that Ian Rankin’s book Witch Hunt is less poor than James Patterson’s 3rd Degree. (Paul Rankin, who is a celebrity chef, is irrelevant. Isn’t it confusing when people have the same surname? It shouldn’t be allowed.) Neither books were purchased, good heavens no, simply liberated, so it’s OK.

On the final evening of our visit, we went to see some people pretending to be Vikings. 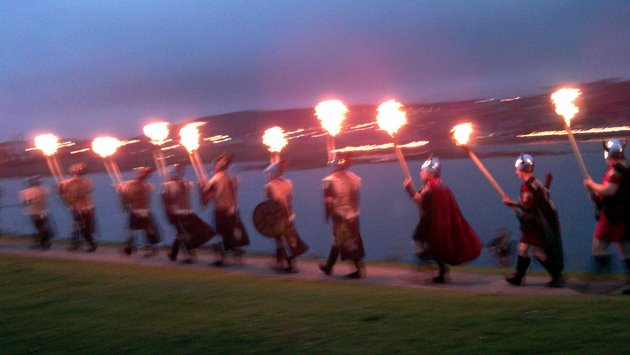 I did a lot of other photographs, between 100 and 200 in total, not all of which were disappointing. Also, videographs – a considerably reduced down compote may emerge one day. The Samsung U10 disappoints on the still photograph front (and I cannot blame myself, because it is not possible to fiddle with settings), when there isn’t the distracting dazzle of magic high definition moving pictures. The videos are a bit noisy, which is to be expected, because it was windy, and there is no way of using one of those fluffy things that are called the same thing as a female genitalia.

We left the archipelago after a bit longer than a week, but for a further amount of time, I was still in Scotland – predominantly Edinburgh. The pesky elves in the sky were quick to attenuate the nice weather that had been going on towards the south in my absence. I think I may be cursed – it happened when I did my other Scotch vacation – and that’s OK.

I am a little bit disappointed with myself. For 35 whole hours I was on my own in this urban location. It was a rare window of opportunity for me to be rebellious. I could have bought some Pringles! Instead I bought an unripe pear and some antiperspirant deodorant. I intended to get a sandwich too, but couldn’t find the (in fact very much existent) sandwich area of Tesco Express. I had heroically rejected a plastic bag, which really is relevant, because I felt that if I went into another retail outlet to buy a sandwich, I could be accused of theft, and so I simply wandered around without coordination as my unripe pear became seasoned by the nasty urban fumes. It felt tragic. (The pear still didn’t taste of anything.)

I returned home over a week ago. (This passage, has taken far too long to write, especially when you consider that it is not particularly good. I started it when I was still inside the Edinburgh!) One of the first things I noticed was a sock, festering in a cup of cold liquid. It was clear that, without my firm direction, everyone had turned into savages. I worry about what would have happened if I had stayed away for much longer.