The audacity of soap

Some time ago, printed inside the magazine that falls out of the newspaper on Saturdays, there was a brief, light-hearted sort of interview with a man named Alan Titchmarsh. It’s not the kind of thing that I make a habit of poring over, I promise, but one particular statement managed to catch my eye as I flapped past, and has haunted me ever since:

I only ever use shampoo in the shower – I don’t use soap. I shampoo my hair and then spread it all over. It keeps my skin soft.

Now, I’m happy to admit that I don’t really know what an Alan Titchmarsh is. He is some kind of broadcaster, I think – something to do with gardening – and, not uniquely among such people, he does books. Maybe he’s a twit, but that’s probably quite an unfair allegation, since I don’t know him or anything. I did once have to look inside one of his books about gardening – I think I was looking for a picture of a snail, so that I could make a candelabra, which is a very completely normal thing to do – and it seemed a bit nasty that he was advising readers about how to kill “common pests”. Alan Titchmarsh would be a bit annoyed if a snail was trying to kill Alan Titchmarsh.

However, since reading that article I have been influenced by the snail murderer. Whenever I wash the hair that is on top of my head, I use any excess shampoo to clean other areas. I am rarely so overgenerous with the shampoo that I may avoid supplementing it with proper soap, and I don’t use shampoo when I’m not washing my hair, but it is a wholly sensible technique that I employ whenever I have squeezed out too much shampoo (quite often). There are clumps of hair growth in secret places that aren’t my head, so it’s probably quite appropriate to use shampoo there.

But Titchmarsh claims to be considerably more extreme: shampoo is the only form of soap that he ever uses in the shower, ever. As keen anoraks will point out, he seems to suggest (incorrectly) that shampoo doesn’t count as soap (it does), but we get the idea nonetheless.

The quotation implies that he washes his hair every time he has a shower, which seems a bit much becuase he doesn’t have particularly long hair – perhaps he adapts by reducing how often he does a shower, or by sometimes doing a bath. I wonder whether by now, nearly two whole years after the article was published, he has become more moderate.

Does it really keep skin soft? What evidence is there to back this up? Who the hell does Alan Titchmarsh think he is, making these bold statements? He isn’t some kind of expert. Even if it is true, how beneficial is soft skin? Snails often have soft skin, so it seems a bit messed up that Alan Titchmarsh is trying to emulate what he himself – or possibly his ghostwriter! – has described as “common pests”. I am reminded of those anti-ageing sorbets, that claim to produce glowing skin, which would be a bit unsettling if the claims were true.

If shampoo really is the most effective soap, how come this isn’t bandied around more by the soap companies? Does Alan Titchmarsh think he is a consumer champion – does shampoo end up being more cost-effective for the end user? Is soap really more profitable than shampoo for Mr Palmolive and his colleagues? Shampoo tends to be packaged in thick plastic bottles, while soap can make do with a thin layer of paper – so Alan Titchmarsh is encouraging a lifestyle that is damaging to the environment.

I have mulled it over and the only possible conclusion is that Alan Titchmarsh is spreading lies so that he can start selling shampoo made out of snails, and everybody will buy lots of it, convinced it will make them have better skin, having read a small article that was published in a newspaper in December 2008. He will be rich enough to live in a bath of shampoo, leaving a slimy trail wherever he goes, like the snail he has always wanted to be. He is jealous of their relaxed, oozy lifestyles – that is why he seeks revenge. He must be stopped.

I hope Alan Titchmarsh is shivering, now that I have exposed his evil ways. I looked at his website – I shall not link to it, because a potentially dangerous man does not deserve Google juice – and noticed that, irresponsibly, he has put a picture of his signature at the top of every page. (He is even less responsible than Mr Picasso, because at least those cars cost money, and are fitted with car alarms should anyone approach with tracing paper.) He doesn’t seem very clever, which is fortunate – his plan seems unlikely to ever succeed. Very few people read those brief, light-hearted sort of interviews in that magazine. What was he thinking? 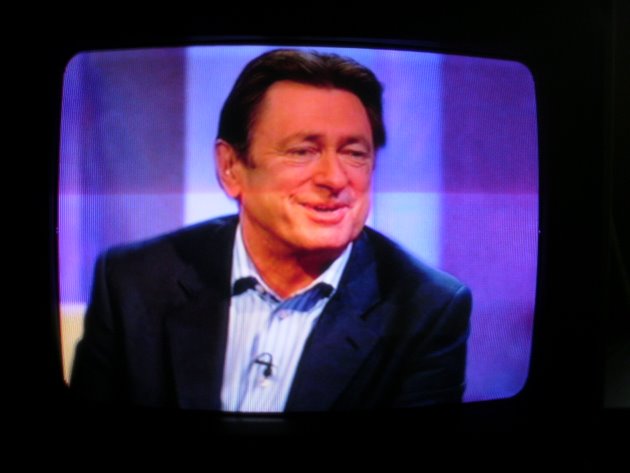 Would now be a good time to address another exciting soap development? I hope so. Mr Dettol has invented a battery-powered soap dispenser that magically detects approaching hands and squirts soap onto them without requiring any harmful touching of the dispenser that would smear the hands with evil germs who would presumably be biffed by the soap anyhow.

When it was still topical, Richard and Judy from off of the television did a very effective attack that was printed inside an otherwise irritating newspaper called the Daily Express. I wonder how they managed to write a single article, despite the challenge of two different people – I do hope they took turns to write one word each. A degree of confusion is apparent, as they dart back and forth from “we” to “I”, but even so they managed to do a good job. That’s how easy it is to see the ludicrousness.

The Dettol advertising makes me feel slightly sick. A beastly disembodied lady’s voice, saying things about bacteria that probably aren’t true, so that paranoid viewers will dash to smother Mr Dettol’s pockets. If it were really effective, I would really be sick and have to use some of their disinfectant to clean it up, but that doesn’t happen. They didn’t think of that.

(It seems to me that they can’t be particularly keen to help us not catch diseases, because their disinfectant business is a bit reliant on people doing vomits. Of course, the obsessive cleanliness pandered to by their soap apparently makes immune systems wimpier, so Mr Dettol wins lots of different things. It is nasty, serious stuff, a bit depressing. Sorry.)