As a small child, I was haunted by a book that peeped out of the bookshelf, a hard-backed one entitled Introducing Watercolour Painting, although “Introducing” was made up of such tiny letters that this callow youth assumed that it was simply Watercolour Painting. How wrong was I? I was a bit wrong, yes.

To be precise, it was the image on the back cover that haunted me, more than the book itself, but that doesn’t matter – what matters is that it haunted me, although that probably matters even less.

The image depicted an owl. It could have been a photograph of an owl, but it was probably just a photorealistic painting of one – a watercolour painting, yes, that would make sense.

In actual fact, it was a gouache painting, over-glazed with transparent watercolour. A bit tenuous, I think. Here, look at it, isn’t it horribly terrifying? 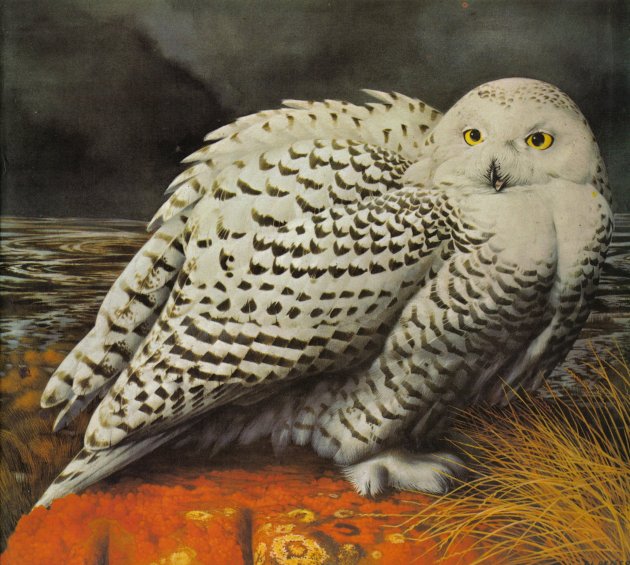 It’s a bit loathsome. Its foot has something of the Honey Monster about it, and the eyes conjure memories of the Esso Price Watch tiger. The painting’s name is Snowy Owl, and Barrington Driscoll did it. Sod him.

The picture doesn’t just appear on the book’s dust jacket – it’s found again inside the book, one of the few full-colour pictures. Why reproduce one scary picture, in full colour, twice, in a book that is otherwise almost completely monochrome? And, although the intention may have been to say, “this book is not just for people who want to do paintings exclusively with watercolour paints,” it’s not even a proper watercolour painting. We are looking at some kind of conspiracy, clearly.

Who had written the book? “Pope” was written on the spine, apparently a surname. One day, I happened to hear the name “Alexander Pope” – I think one of the men inside the radio had said it. He, obviously, had made this book about watercolour painting. I think I assumed, correctly, that he was someone who had been alive in the past, and it didn’t seem at all unlikely that he could have been the pope at one stage. (It turns out that he was a poet in the eighteenth century. Don’t worry, I did have to check, with the Wikipedia website.)

I am immensely arrogant, so if I had written a book, I would be keen to festoon the cover with all of my names – it’s just like when a dog does a wee. “Pope”, however, was perhaps a little ashamed – and I think I would be ashamed, too, if I was scaring small children with my poor choice of illustrations. And yet, he was unashamed enough to write his forename elsewhere.

It turns out that Mr Pope is Michael Pope, who also did a book called Introducing Oil Painting. It would be prohibitively difficult for me to check, but I sincerely hope that that book did not include a picture of an owl, because “oil” and “owl” are dangerously similar, which could lead to all sorts of confusion and embarrassment.

The book is these days available from Amazon.co.uk for one pence, although the delivery costs several pounds – the old chestnut!

Michael Pope is not actually the pope, either. This is hotly topical because the pope today met the president of (the) Seychelles. She sells seashells by the Seychelles, right? I should be on The Now Show.

I like to think that I would be good at being the pope. There are some problems: I do not believe in god, I have failed to learn the play the piano, I am not very good at speaking more than one language, I would never spend that much money on shoes, I am neither a cardinal nor a bishop, I would never wear a “mozzetta” (a cape, too easily confused for the cheese off of pizzas), I think that there is nothing wrong with contraception, I don’t like homophobia, and I think that child abuse shouldn’t be covered up (maybe smothered, deprived of oxygen, destroyed). (Controversial views, right?) However, it would be unwise to discount me just because of that – I have many assets, and I am sure that Jesus would be open-minded. In a lot of cases, most reasonable people would say that even some of those “problems” are themselves assets, oh yes. In any case, I am with the pope when he says that aubergines are wrong – they are far too bitter, you know. Although, maybe they’re all right in a ratatouille, in fact.