Of course, you may wonder who exactly I think I am. Mr Fearnley-Whittingstall’s spokesperson, perhaps? No, actually, and such a delusion has never existed in my mind, ever, I promise. The idea of a creepy individual becoming convinced of a close relationship with the rustic chef, based purely on his friendly style of writing and presenting, even if he (as I suspect) doesn’t draw multiplication signs at the bottom of correspondences, is not inconceivable, but my stability is such that I am far enough from being that individual.

I neither know nor claim to know Hugh Fearnley-Whittingstall, but I did see a thing occur inside the television that exposed him as a brazenly extremist anti-sandwich lobbyist pillock. Perhaps he was putting on an act, perhaps the film was misleadingly edited, perhaps in real life he’s a normal person who’ll be one day caught red-handed – literally red-handed – with the tomato ketchup of a bacon sandwich dribbling down his hands, but when I looked into his eyes, I saw convincing enough evidence that he really meant it. It was completely terrifying.

“The end of the sandwich is nigh,” said Fearnley-Whittingstall, bold as brass, on national television, as we watched him standing in a selection of public places, with a sandwich board strapped to his shoulders, on which was written a light-hearted punning message. “Sandwich? Bored?” 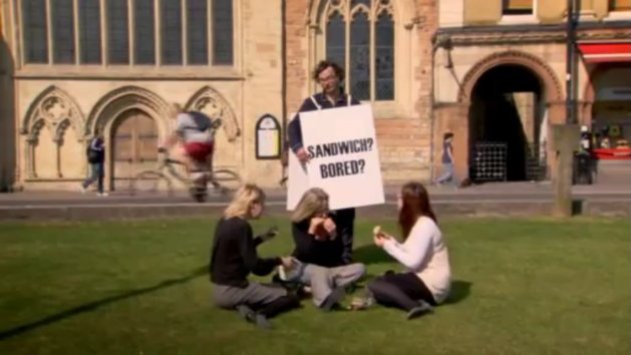 Maybe he’s right. Brackish butter, raw white and “malted” breads, wheat-induced lethargy, unsustainable plastic packages and tuna are the bane of my life. Certainly, buying something from a shop is a sticky minefield, and I’m sure that all will agree that I’m not offensively trivialising that word.

But it doesn’t have to be that way. You can still have a sandwich without butter, without wheat, without tuna, without being bored – and there can be no better way to stick it to the man and recycle leftover items than by pouring them between thick hunks of the “staff of life” to form a home-made one.

Weeks later, again inside the television, on the same channel (the fourth one), Jamie Oliver appears, donned in a cap. (This must have been because there was sunlight incident on his eyes, even though he was indoors, with his back to the window, and a sunset has recently happened. He must have abnormally sensitive eyes.) Mr Oliver makes a sandwich, using a great phallic baguette and some steaks of meat, a process that involves whole minutes of cooking with pans and an oven and everything. This is not the shop-bought, floppy horror that Hugh means to deride, but it is still a sandwich (albeit one that strays precariously near to “panini” or “hamburger” territory), and mustn’t be overlooked. What kind of messages are the Channel 4 channel sending out? Mixed, hypocritical ones, that’s what.

Free with today’s Observer is a thin, pocket-sized (A6?) pamphlet, written by Fearnley-Whittingstall himself, detailing the preparation of some exciting and healthy lunches. One of these involves placing some food on a sheet of bread, to form a sort of sandwich, which represents a complete double-standard. Better still, in the aforementioned River Cottage television show, which can be viewed online, the disgusting anti-sandwich propaganda was actually preceded by a recipe for “the ultimate cheese sandwich”. It is a searingly flip-flop U-turn attitude that makes the whole Blue Peter cat-naming scandal look innocent.

Maybe it’s good to see this sort of pluralism, this free speech, and Channel 4 should be applauded for giving a voice to different sides of the argument. However, that erodes away at my point, and I would argue that the balance is not representative – there’s a silent majority, with too much of a voice being given to the occasional militant anti-sandwich freaks. Perhaps it’s symptomatic of the theories about every television executive regularly eating mouthfuls of cocaines, yeah? There. Sort it out, please. Thank you.