Too much of the previous weekend was spent reading this thing about the politician who is called Ed Miliband. One sentence was of especial interest:

And he remains quite unguarded in his body language: leaning down awkwardly to tie a shoelace as the photographer snaps; later, blowing his nose on a large handkerchief on stage in the middle of a speech. 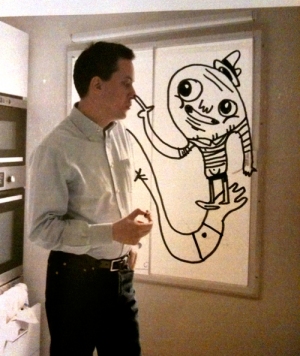 Let’s take a moment to consider what this means. Ed Miliband uses a handkerchief, which, we can assume, here means a reusable, washable patch of fabric – carefully differentiated from the thin papery paper tissues that most modern people use, which would go all clumpy if boiled. Remember, high-class magazines invariably employ armies of “fact-checkers”, so I think we can be confident that this was not a mere throwaway remark, not the remark equivalent of a paper tissue – we can be sure that the journalist was careful to verify the nature of the object used, and any evidence to the contrary would interest the Press Complaints Commission.

Now, what kind of man does this fresh pack of revelations make him? He can no longer be considered “of-the-people”, not now that his flagrant use of an upper-class nose-blowing tool has elevated him to the next level. In some ways, the sustainability is to be admired, although we can’t be certain that the soapy boiling of sturdy cloth works out less harmful, overall, than the disposable slivers of processed tree. (Actually, we can. Some avant garde people even believe that Charles Kleenex specially formulates his packets to produce clouds of particles that disturb the nasal corridors. Shocking!) But do you really expect voters to relate to this handkerchief-toting freak? How on earth can he even begin to understand the issues that matter to the public, if he doesn’t wipe his nose the same as how everyone else does? A-boo.

As I write this, my fingers deign to gravitate towards the wrong keys, the A and the V and the I. Oh dear. And here’s a thing: I have written about Ed Miliband here surprisingly often, whereas the volume of writing about his brother David is less cause for concern, being so much closer to naught. So, the inconvenient twinges in my fingers can not be attributed to familiarity, to habit – quite the opposite, rather. In a proper world, it would be the other way round, you might think. Imagine what it must be like for the normal people, who mention David more than they mention Ed. We should not be surprised by the chap’s weak brand awareness – it is a fiasco in the tradition of Ask Jeeves becoming Ask.com, Norwich Union becoming Aviva, Opal Fruits becoming Starburst.

Unless my fingers are so sick of constantly hammering those same, tired old letters, again and again, that they want a change. Yes, that must be how fingers work. Someone out there will protest, referring to experiences of lurching between Paint Shop Pro and Photoshop, but they are a shimmering liar. For that reason, I have to conclude that Ed Miliband is the right man to lead that political party. Yes, it is unhelpful that my own fingers happen to be already tired of spelling his name, but I am unusual. For most people, the opposite will be true. Hooray for Ed Miliband. It was probably a polyester handkerchief, too.