One doesn’t usually imagine that a box of Christmas tree decorations can hold much delight. But, believe it or not, it can, as I discovered last year when I set about draping our prickly dead plant with a herd of different ornaments, the things of magpies’ dreams.

There are those, I suppose, who find tons of delight the likes of baubles, tinsel, shiny stars made from tin foil, and squashed paper chains. I am not one of those strange people, though. And yet, I was still elated by what I came across in the box of decorations. How can that be?

Well, you see, I was charmed not by the decorations themselves but by the some of the other things in there. The housemates, I suppose you could say, of the usual tree-adorning suspects.

I found a herd of balloons in a crinkly plastic bag, which I immediately inflated and became obsessed with for a while, until I burst them all in a desperate bid to return myself to sanity. But that’s not all – I also found a goat.

“A goat?” you exclaim in shock. “A goat? In a box of Christmas decorations? How can that be? That’s cruelty to animals, that is, I’ll have you know. Do you want me to contact the Royal Society for the Prevention of Cruelty to Goats?”

Stop! Don’t worry, you distressed animal-loving damsel. I don’t mean there was an actual real animal, nestled among the plastic baubles and fairy lights. Oh, no.

“Oh, I know what you must mean,” you cry. “I know. It must be something to do with one of those charitable well-meaning middle-class schemes, where you can give a goat to some poor people on behalf of a loved one. Do I get a biscuit?”

No, you do not get a biscuit. Even if you had correctly guessed what I mean when I speak of a goat, you would have received no congratulatory cookie or “well done” wafer, because no biscuit goes within ten centimetres of me without getting eaten. Given that you still haven’t even worked out what I am referring to, I would never reward you in a million years. (Although there’s no stopping you from fishing through my faecal matter in homage to Gillian McKeith, if you’re into that sort of thing.)

Perhaps this photograph will help you identify the goat I’m muttering about. 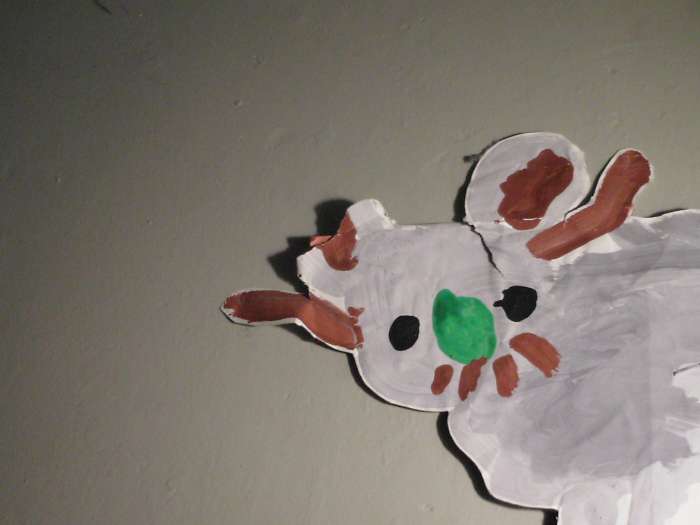 You might be wondering what that picture shows. Well, I’ll tell you: it’s a goat puppet, made of paper and paint and a stick of wood.

I know the puppet is supposed to show a goat, rather than something else – a muffin, perhaps – because below the goat’s papery legs is a small scrap of paper that says “Joshua – The Goat”. This not only identifies the intended subject of the image, but tells me what my name is should I ever forget it. This is a most useful feature and I will be sure to carry the goat puppet around with me for the rest of my life, just in case I forget my name.

You’re probably wondering what this goat puppet was doing in my box of Christmas tree decorations. If you aren’t wondering that, then there must be something wrong with you, because every normal human being would wonder that in these circumstances. The reason for the goat’s presence is that long, long ago – back in the age of the day when three memorable things happened together – I participated in a rather wonderful school performance of a story.

I’m not sure what the story was. I think it involved one of John Burningham’s books involving the Mr Gumpy character. Whatever it was, one of the characters was called The Goat – that being the part I played – which narrows it down a lot.

I was delighted to play the goat, since I like goats. Did you know that the goat is the only mammal which I have footage of doing a wee? You do now.

These days, the goat gets little use – apart from as a tool for reminding me who I am, of course – but I’d certainly like to resurrect it once more. I have been toying with the idea of some online video puppet shows, for which I believe there is mammoth demand.

I could cash in on the craze for “fan fiction”, for example, with Mr Goat Circulates Air In Order To Produce A Cooling Effect. Or what about Mr Goat Goes To Tesco? The possibilities are characterised by endlessness.

Sadly, though, the life of an important world statesman like this one is busy, and I envisage that my bursting schedule will result in this genius idea not coming to fruition any time soon. I have people to meet, hands to shake, things to do and tee-shirts to get. I also have to concoct some more satisfactory endings for my blog posts.