We shouldn’t have to shorten urls. It’s only because of a fairly selfish and unwise company in San Francisco that we’re adding an extra layer of fragility to an already loosely-coupled network. Introducing another point of failure.

But with all that disclaimed, we still need url-shorteners

Or do we? I’m going to come right out and say that the shortening of URLs solves nothing about the internet site Twitter. Let me explain.

Here, I compose a tweet containing a long, unshortened URL. Obviously, it’s longer than 20 characters, but Twitter actually pretends that it’s just 20 characters long, leaving room for 120 (that’s the number on the right above the keyboard) more before I reach the limit of 140 characters: 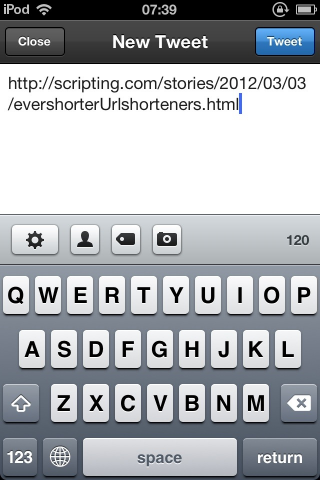 Here, I instead use that URL in a shortened form – one of the Dave Winer’s very clever new ones, announced in the aforelinked post. It is even shorter than 20 characters, but guess what: 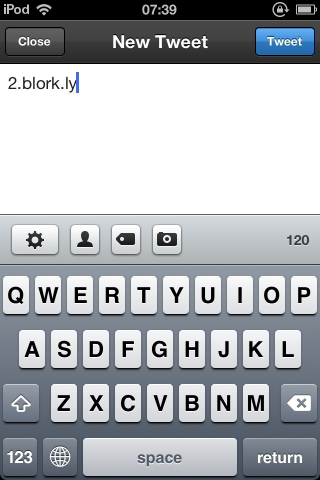 Again, Twitter pretends that it’s 20 characters long, even though it isn’t. Try it at home if you don’t believe me. (Some Twitter clients’ character counting mechanisms might not be up-to-date.) Shortened or not, any URL is now worth exactly 20 characters in Twitter’s eyes. It is weird and confusing, but doesn’t it at least mean we don’t need URL shorteners after all?

Update: 20 seemed like a very specific number of characters – to be clear, it is because the t.co URLs that are now wrapped around every link are currently all themselves 20 characters long. (They will presumably get gradually longer over time.) Sometimes the shorter original URLs do slip through the t.co net, but it seems to be a bug not a feature.

Update: Apparently Dave Winer’s particular URL shortener “returns hitcounts”, enabling a slightly useful “top 40″ chart. But I don’t believe that all the people pre-shortening URLs are in it for the analytics.