Lord Young is not young at all – in fact, he is quite old. And he has something of Professor Lazarus about him, don’t you think? 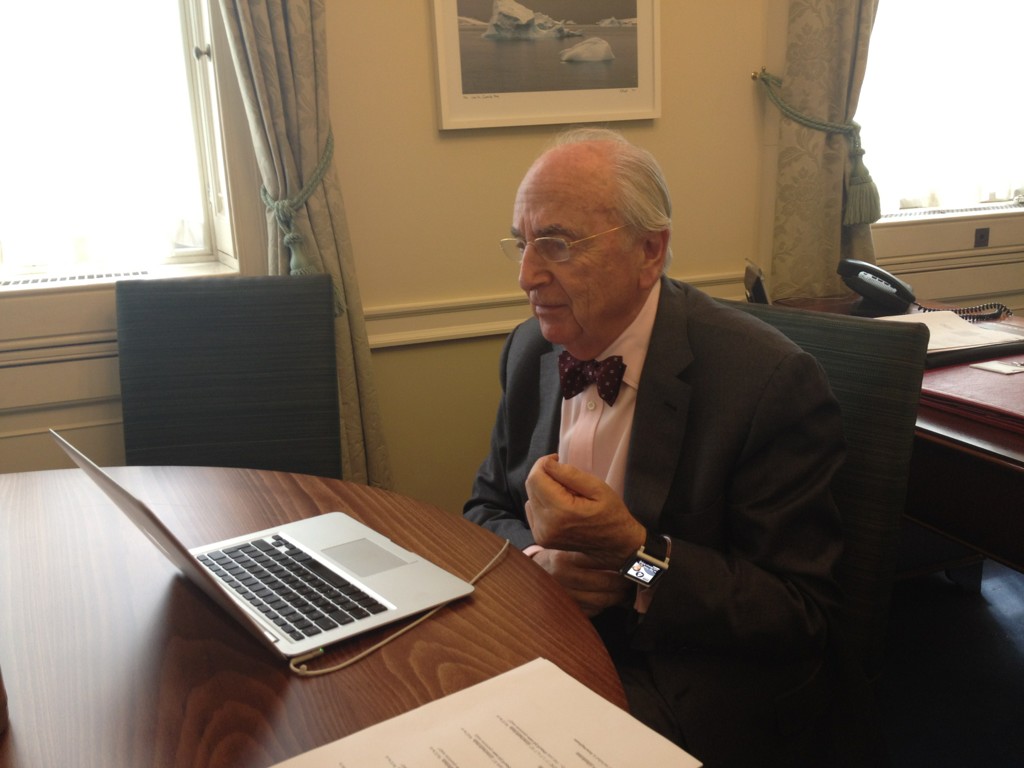 But let’s not hold that against him – many people are old, and almost as many resemble Doctor Who villains. Let’s not even consider his role in privatising British industry. Instead, let’s zoom in and enhance to admire the iPod nano (6th generation) he wears on his wrist: 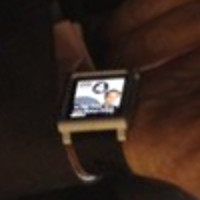 In this photograph, taken to promote a “twinterview” (!) about some supply-side measures more than two years ago, the device appears to display on its screen the artwork for the podcast of Melvyn Bragg’s In Our Time radio programme.

An article in the Times from some months prior – a length of time that suggests a quaintly long attention span – also mentions the Tory grandee’s wristwatch:

Lord Young of Graffam, the bow-tie wearing former Trade and Industry Secretary, who is 80 next month, has rigged up his own wireless network and Bluetooth keyboard for the iPad in his No 10 office. Recently he has taken to wearing on his wrist an iPod Nano converted into a watch, using a special strap purchased from a crowd-funded inventor’s website.

(His own wireless network, eh? Cutting-edge! Although I do wince at most people’s complaints about the speeds of Wi-Fi and 3G in crowded public places – it’s a bit extraordinary that we can send information through the air at all – so don’t let’s complain that it’s sometimes a bit slow, and so maybe let’s not scoff at this either.)

When I bought a similar iPod nano (6th generation) and special strap, was it a secret longing to be like the bow-tie wearing former Trade and Industry Secretary that made me do it? I cannot say.

One’s youth should be a time of experimentation and things, so maybe it was some of that. Needless to say, wearing a portable media player on your wrist makes you look like a ninny, and I quickly gave it up – sold the information pod to another mug, and rather wastefully let the special strap collect dust on a dressing table somewhere.

Ninnyishness wasn’t the only thing: it turns out that, if one listens to podcasts, the luxury of having a network connection – as offered by modern information phones – is hard to give up. This makes me sound like the worst kind of person imaginable, but these days who gets out of bed for something that necessitates plugging in a USB cable? It’s so much civilised to suck bits into your device wirelessly.

Since the iPod nano (6th generation) stopped being a new thing, many shimmering new “wearables” have been shown off, and all of the more ambitious kinds continue the rich tradition of looking quite daft. Of course, early mobile telephones made you look like a prat, even though you didn’t have to wear them, and we should be grateful to the pioneers who for years slowly forced society to acclimatise.

But until we can enjoy the presence of a future in which the physical size of today’s bulbous battery packs has shrunken down along with the stigma associated with strapping one to your head, all we can do is speculate and jeer – and that’s OK.

One thought I had: although, for example, the sleekest “Android Wear” devices are still all far more ostentatious than the old digital watches that terror bombists reportedly tote, wouldn’t the current technology make an impressive bike computer?

On second thoughts: probably not. Another thought: would the motor car–targeting gewgaws in fact be a better candidate for the metal things with wheels that bicycles usually are? Then: no, don’t be ridiculous. And: although there’s a drive to encourage cyclists to buy some amount of often oil-based plastic accessories to smother fears about things, thank goodness it rules out any conceivable attempts at selling the kinds of handlebar-mounted distractions I briefly imagined. (Don’t go getting any ideas.)

Professor Lazarus from Doctor Who, of course, craving immortality, built a “Genetic Manipulation Device” which made him younger. Then it turned him into a sort of giant scorpion. There is no implication that Lord Young of Graffam is a scorpion.