Something on my mind these days is advertising. I’m keen to get the word about this blog spread about as much as possible, you see – it would be selfish not to – and I have been keeping my eyes peeled for examples of advertising.

Here is a tasty morsel of advertising that I want to talk about. It’s a billboard advertising a product called “Tango”, which is some kind of fizzy, sugary, orangey beverage which I have consumed on two occasions. 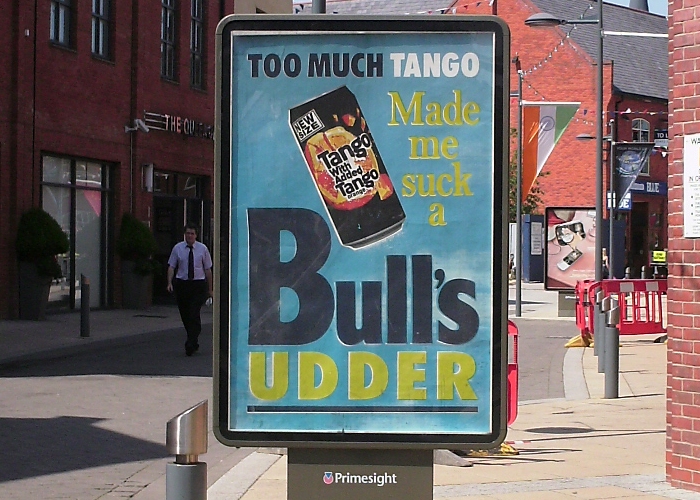 The advertisement tells the tragic story of a person who drank too much Tango, and was then compelled to suck the udder of a bull.

Naturally, the makers of Tango want us to drink as much Tango as possible. So why are they warning us that there might be these dangerous side-effects?

If such side-effects exist, then it’s obviously a legal requirement to stuck some small lettering at the bottom. But the thing is, there is no evidence whatsoever, as far as I am aware, to suggest that consuming too much Tango can do anything other than destroy your teeth. They are presumably trying to sound dangerous and edgy, like drugs or something, but instead it’s off-putting.

Although I live in the countryside, there are not many bulls nearby. In order to suck a bull’s udder, I would have to run for miles, squandering time that could be otherwise used much more effectively – I could be busy not writing a blog post, for instance.

Unless maybe this is a cunning plot from the makers of a rival fizzy drink, such as Dr Pepper (who, I believe is not an actual qualified doctor – a bit like Gillian McKeith). In that case, it’s very clever indeed. There will, I assume, be a follow-up – “Too much Dr Pepper made my goldfish immortal”, or something else equally enticing.

I’m thinking of a similar plot. “Reading TechCrunch turns your eyeballs into corks.”