Two whole months have passed since that jolly occasion when I displayed slightly-worrying affections for my new portable digital media player device. It was back in that golden age when people still actually left comments on this blog – those were the days. And yet, very frustratingly indeed, it remains the case nobody from SanDisk has contacted me about some kind of lucrative sponsorship deal yet.

In the absence of any communication, I’ve decided to write a bit more about the topic. Those few words were, I think, perhaps not enough. Especially in this revolutionary new age of freeconomics, the amount of stuff that I offered for free could be considered by a even the most reasonable of people to be quite paltry.

Besides, I have things to say that I want to get off my chest. It is my duty to say them. Obviously, I am completely and utterly not in it for the money. Not remotely. It would be disgustingly cynical to suggest that. But of course, SanDisk, it would be a lovely gesture if you could acknowledge the work that I am doing to help you out big time. A little “thank you” for the millions of sales that are blatantly all the result of my influence. It’s not just the stuff written here – don’t forget the numerous fashionistas who have seen this cool, internationally-respected syle icon using the Sansa Fuze out in the wild and decided that they really need to own such a hot toy themselves.

Naturally, these mildly-artsy pictures what I made are partly what compelled me to write this 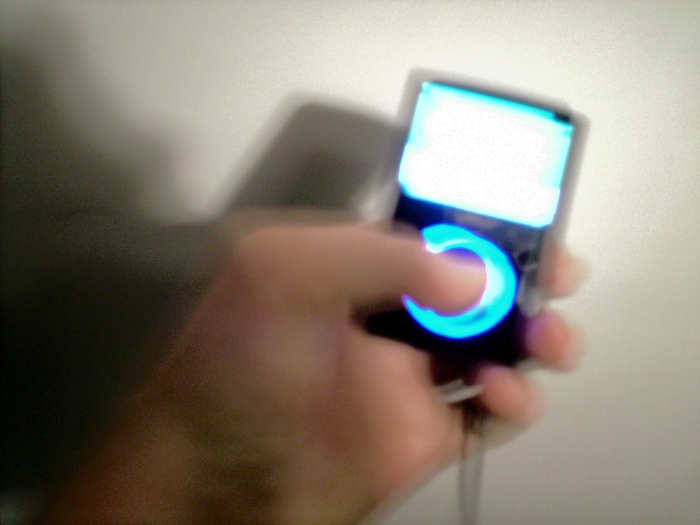 If you’re the kind of person who wears their trousers inside out so that the label can be seen, it’s likely that you’ve got an iPod. They are like the things to have if you want to listen to music.

But there’s a problem with wearing your trousers inside out. Sure, it is easier for passers-by to learn that you’re a bit of a hip coolster, and think “I find that hip coolster attractive and hip and cool”. But it’s also easier for money to fall out of your pockets, and for pickpockets to see that you’ve got money in your pockets, and it’s harder for you to extract money from your pockets. As a result, those who wear are their trousers inside out are quite likely to be unable to afford iPods in these economically-challenging times.

Also, nearly everyone’s got an iPod. And that’s a bad thing. That makes the iPod so mainstream, and so mainstream is a very bad thing indeed. It’s nowadays considered mainstream to skin moles to write things on, too. And mole-skinning is uncool.

Those two facts create a cocktail that will over time grow more and more rancid, and in turn the iPods on which the cocktail is spilt will grow more and more unappealing to the trendy people. The Sansa Fuze is, perhaps, a solution to the problem of the iPods’ increasing rancidness – from a distance it looks like an iPod, and it has all of an iPod’s whizz-bang features most of the time, but it’s far less pricey than an iPod and it’s not as mainstream as an iPod.

I’ve got one, and I like it very much thank you.

Unfortunately, it has become quite scratched. This makes me sad. My regime of polishing it daily with a very special cloth has fizzled out, like most regimes do. Perhaps there needs to be some kind of portable bear included in the box to pounce on anyone who approaches h. Actually, no, not a bear. There was a rather ugly soft black sock included in the box, into which one is encouraged to slip the machine to prevent damage, but unfortunately I have lost it.

I have also lost the USB cable. This would normally be no problem at all, for I have more USB cables in my drawers than I know what to do with. But infuriatingly, SanDisk is an evil stupids, and insists on using a special USB cable that is very different to the standardised type used by most normal people. I’m going to have to buy a new one if I am to use my baby ever again once the current batch of juice has been guzzled fully.

Also, I still cannot plug it into this here computer without the screen turning blue and deadly, and the computer shutting itself down. Far too long after I sent an email, I eventually received a response telling me to look at the documentation on the website. Obviously I only emailed them because the documentation on the website had not been sufficient – they make a great deal of fussance about. How dare they suggest that I had shunned the documentation? I am acutely aware that the email form is not some kind of search tool. So much for “love to hear from ya”. Like some kind of hairy version of Dom Littlewood, I want to expose these unhelpful cowboys whilst talking in a funny geezerish voice and doing peculiar things with my eye(brow)s. The solution is probably to back everything up and wipe a slate clean or something, but I don’t want to do it. Putting everything onto my seriously-uncool MP3 player that is of the sort that is given away free by tabloid newspapers and like actually will play with this computer, and then transferring everything over using a computer that is not selective about who it will play with (ie every computer in the world that is not this one), is a convuluted-sounding method but actually not that much a pain in the neck or the arse or any part of the body at all. The trouble is, it means carting my USB cable around all over the place, and that’s why I lost the darned thing.

Bizarrely, although the Sansa is a hugely unknown brand, and people think that “Sansa” is my inability to pronounce “Samsung” (not true at all; the idea that I would support Samsung, the evil fuckers what sponsor Chelsea Football Club with their hideous cheese-and-onion blue tee-shirts and shorts, sickens me), people have recognised it for what it is. Of course, I am spreading the word and the coolness is virulently infectious.

If you have read this far, go and help yourself to a sun-dried tomato. You deserve it. Remember to wipe the teaspoon clean. Do use a teaspoon or you’ll get oily hands. 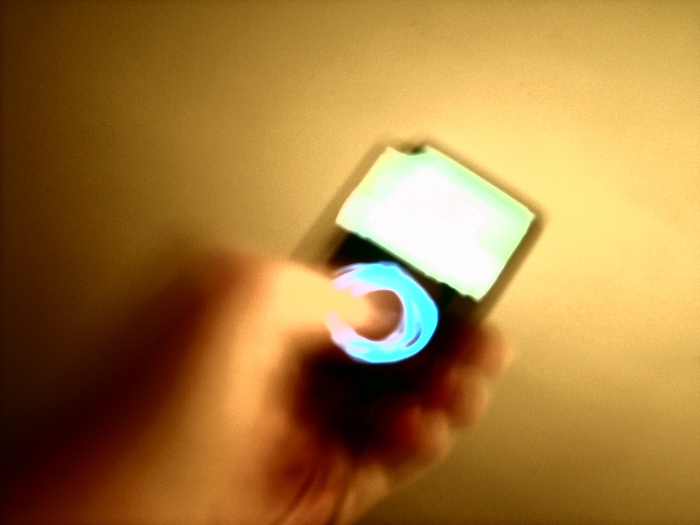