According to the doubtlessly accurate image printed on the glossy rear of the cardboard box, William Keith Kellogg was quite the epitome of a typical being sprung from the loins of Adobe Creative Suite, albeit with a smoother, shinier sort of texture than would be expected, and a distractingly phallic Postman Pat–style nose. (The image below does not quite do it justice – the glossy cardboard is a fundamental part of the effect.) 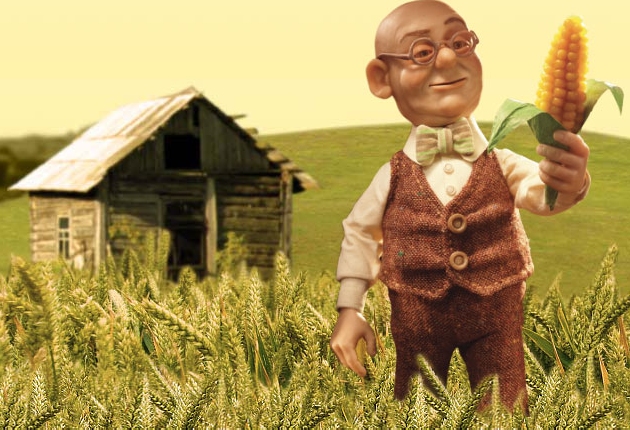 I don’t understand why that image is used. Would you buy breakfast cereal from a creepy kind of plastic robot man with Ray Wilkins’s head? Toasting flakes of golden corn surely involves heat, and wouldn’t it be terrible if the strange waistcoated figure went all melty, if drips of him were to dribble into the mixing bowl?

Of course, I do here shockingly imply misleading untruths about what happens when plastic hots up – at least within the relatively cool confines of a domestic stove, it doesn’t go runny, just develops an unsightly mottling, especially it it’s a thermosetting polymer. But, in fact, “just” the development of unsightly mottles is even worse – a grainy texture is produced, a texture that invariably will conjure tearful memories of the bitterly dreaded rocky shards of volcano found in every good bathroom. You know the ones, they leap from the heights of the crusty suction strips whenever the shower curtain is lightly rustled. (They’re intended for grinding down the soles of feet to smooth stumps, which I believe is achieved entirely in a drip-drip-drip fashion through those forceful accidental toe-bound drops.)

WK Kellogg was probably in great demand as a human pumice stone – his friends and he happened to run a sanitarium – but that roughness does not lend itself well to reassuringly hygienic wipe-clean properties. The germs gather wherever they can, and a swift going over with a sponge dipped in hot watery soap will never be close to enough. Oh, he looks smooth and wipeable enough in the pictures, but that’s just a drawing that was drawn by a wily commercial artist, and must be taken with a pinch – a handful – of salt.

Maybe this hygiene challenge explains why enjoying some Kellogg’s Corn Flakes for breakfast seems have a detrimental effect on the consistency of any solid matter that pops out during my subsequent rendezvous with the lavatory. Is it the Corn Flakes’ fault? I do know that, a bit like how one is never more than five inches from somebody reciting that unmemorable statistic about rats, the unravelled length of an fully-grown person’s intestine is reputedly equal to the circumference of seventeen hockey pitches. (At any rate, I’m confident that it is something within that ballpark.) And, I cannot comprehend how a clump of breakfast would manage to effectively circumnavigate several ballparks in the few short moments between breakfast time and and the subsequent call of nature (sometimes as short as an hour). But I ask you, can it be a coincidence?

Kellogg was a horrid quacksalver – occasionally a proper doctor, who did happen upon an accurate prediction of the dangers of smoking, but only sort of by accident, like when some monkeys invented the typewriter. Alongside many other interests, he was obsessed with colonic irrigation, which seems like a related area.

I don’t want to be too hard on the man: it is obvious enough that he was quite a troubled fellow. Even so, I say he was a royal prig, for the simple reason that he was an author who had three names, so that a librarian might not know whether to place the book in the “H” section or the “K” section. Now, he is still well-known, with a Wikipedia entry and everything, and clearly his unwavering confidence that we would all know about his surname being in fact single-barrelled was not misplaced, but what sort of intensely arrogant twit does that make him? Maybe Doctors Oetker and Pepper are a trifle more arrogant, for plastering their titles on their products, but then it was the avaricious Mr K, rather than the bearded quack, who made processed corn what it is today – who knows Dr Kellogg might have done?

Although I am so happily over that phase, now just occasionally indulging in a cheeky occasional sliced banana/tangerine/apple/pear, I used to sprinkle extra glucose onto Corn Flakes, and would be wracked with guilt whenever I did. The discovery that JH was opposed to food that had any kind of flavour is interesting. Sugar, and artificial flavours – now associated with the Kellogg – are indeed nasty, but we return to the simian typists, and flavour can also be achieved by all sorts of harmless means.

Avant garde fundamentalist Christianity happened to be one of Kellogg’s silly tenets, and I suppose the rationale is that, if he had wanted to, Mr Jesus might easily have magicked together some biryani one day, and that there being no record of his ever doing so is proof of his disapproval. (Sugar, and the newfangled pretend flavourings, I would point out that the Bible is not actually supposed to be a comprehensive list of foodstuffs eaten by Mr Christ – it wasn’t written by Nick Hornby, right? – but I suspect that he just pathetically didn’t like spicy food, and couldn’t bear to have anyone else enjoy it. Oh, if only he’d known about Old El Paso™ Extra Mild Super Tasty Fajitas, things might have been different, but even then the “Super Tasty” would have riled him.

On a ligher note: Snap, Crackle and Pop in other markets. The foreign words seem so much more nicer, but really this is just an illustration of what Alex Ferguson says: “Sometimes you look in a field and you see a cow and you think it’s a better cow than the one you’ve got in the field. It’s a fact, right, and it never really works out that way. It’s probably the same cow and it’s not as good as your own cow.” We’ve all experienced that, now.