Cassette tape players had rewind and forward buttons. Often, each such button was labelled with a pair of triangles, pointing left (◀◀) for “rewind” and pointing right (▶▶) for “fast-forward”. 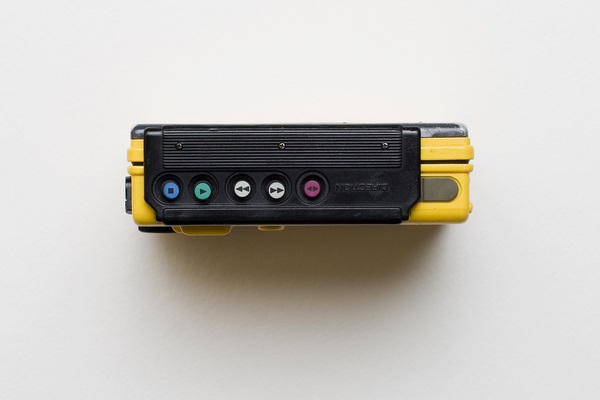 CD players did not necessarily dispense with the rewind and fast-forward functions, but with the advent of quantised “tracks”, it became at once much more appealing to skip straight to the next or previous track on a disk.

How did designers represent “previous track” and “next track” commands? Mostly, they reused the old “rewind” and “fast-forward” labels, adding a single line at each symbol’s outer point: |◀◀ and ▶▶|.

But why have four different buttons when you can have just two? Someone had the idea to consolidate “rewind” and “previous track” into one a single button – the user can hold down the button for a long time to rewind, or jab it quickly to jump to the previous track. “Fast-forward” and “next track” may be combined in the same way.

How to label these clever new buttons, to show that each one does two things? By drawing two symbols on each one: 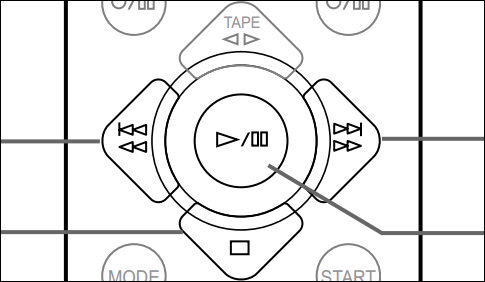 This innovation lives on in the MP3 players we play with today, but somewhere along the way, it was decided that cramming two labels onto one button was unnecessary. See this diagram from an Apple iPod instruction booklet:

The symbol that once meant simply “previous track” had become, overnight, a suitable label for a button that can also do rewinding. (And the same for the one that goes in the forwards direction, of course.) The meaning had changed, gone down the memory hole. Every MP3 player I’ve ever owned has followed this convention.

See also the “Music” app built in to Apple’s iOS, whose buttons, although formed of glassy pixels, otherwise behave and are labelled just like their tactile ancestors:

Just as expected, a quick tap on the right hand button (▶▶|) will skip to the next track, and a prolonged touch will fast-forward more gradually. Furthermore, its opposite companion (|◀◀) behaves obversely in all the expected ways. Oh, of course they all do, and haven’t they always?

The Spotify and Rdio apps for iOS have controls that look just like the Apple app’s, so you’d expect them to behave just the same, right?

You’d expect that, but they don’t. A long press on either will neither rewind nor fast-forward. Those buttons are only good for skipping to the next or previous track. Has something gone wrong? Dissonance.

When I notice, I posit that mislabelling has occurred, for which I blame the people who make these and probably many other guilty apps besides – like, the inventor of Spotify, who is an actual elk. If those buttons must be so disappointingly single-purpose, I decide, well, they ought to be labelled differently, because their current state is misleading.

But how to label them? I try to work backwards. If one subtracts ▶▶ (two triangles) from ▶▶| (two triangles and a line), the result is | (a line) – no, that’s not a suitable label for anything.

I begin to doubt that I will ever be able to trust any kind of button ever again.

Do you see what has happened? Just a moment earlier, we had established that |◀◀ and ▶▶| were buttons that were used only to skip backwards and forwards, respectively, between the tracks of a CD. But the passage of time altered their meaning, so that any buttons thus decorated which did not also do rewinding and fast-forward–ing seemed broken. Chaos.

Now, in the sixth version of the shiny consumer electronics computer operating system, iOS 6, which for now is only available to boring and even impatient dickheads like yours truly, that app “Music” is all different. Most pertinently, the pointy arrow buttons are:

They still behave in the clever two-faced way outlined above, but now they look just like the buttons that can only rewind and fast-forward within the current track, like on that Walkman. What does it all mean? I don’t know. I don’t feel like it solves any problems.

Apple’s controversially fiddly new other app, Podcasts, retains the |◀◀ and ▶▶| buttons at the bottom of its screen, but there are some additional new ones above them: 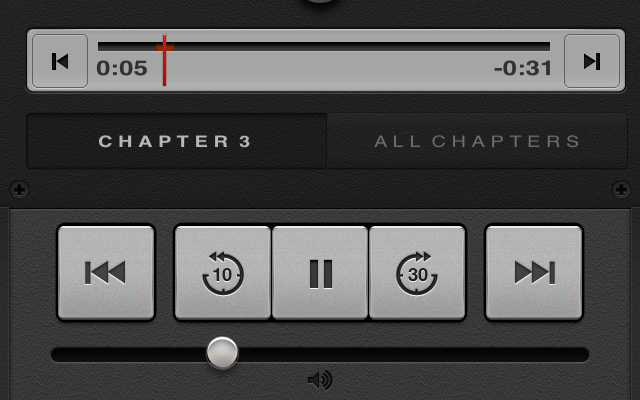 These new buttons (|◀ and ▶|) appear slightly smaller, and each has one triangle fewer, than the classic buttons of whom they could be imagined as children. When most podcasts are played in the app, they are frustratingly and confusingly inert and yet not politely hidden from view; but where a podcast supports the exotic “chapter markers” feature, they light up and their purpose becomes apparent: these junior buttons can be used to skip between “chapters” of a podcast.

I think it would make sense for the Spotify and Rdio apps to be good and copy the labels of these junior buttons, and there’s still time for Apple to reverse the wild alteration of the iOS 6 controls, but I fear that nobody cares and this sorry mess will prevail forever.

Here’s what Microsoft’s Windows 8 does (the right thing):

Windows Media Player, which supports the additional “press and hold to fast-forward” function, also gets it right: 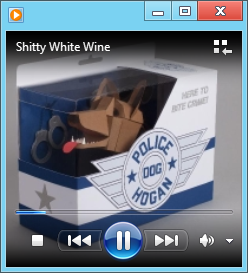 Best of all, this happens while fast-forwarding is in progress: 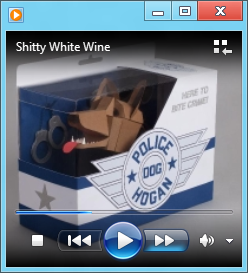