Some years ago, I went to Italy. I saw some nice sculptures, and some tremendous frescoes – hey, why wait for plaster to dry before painting on it? – but what really stuck with me was some paper towels.

You must understand that paper towels are often emblazoned with patterns. Toilet paper is often embossed – with little pictures of dogs, for example, which is quite a strange thing to wipe one’s bum with, isn’t it? – and so are paper towels (also known as “kitchen paper”), sometimes with the added use of ink.

The Italian paper towels that really stuck with me were decorated with pictures of elephants holding watering cans.

I’m uncertain about a couple of things: whether the elephants were holding the watering cans with their trunks or their forelegs, and whether they were decorating the actual paper towels or the plastic packaging. As you might expect, I’ve done some research:

But there’s no evidence of either elephant mascot having brandished a watering can. And if it’s been scrubbed from the web, then I’m not surprised, because what message is an elephant using a watering can supposed to send out?

Which makes me think of flypaper. Now, it’s taken me so long to finish writing this that the unpopular winged insects have faded into obscurity for the winter. But earlier, they would swarm all over any unattended biscotti, strudel, etc at a moment’s notice, so catching them seemed like the right thing to do. Nature has some fine ways of catching flies: there are the Venus flytrap and other carnivorous plants, and there are spiders’ webs. But we think we have to improve on that by covering strips of paper with invidiously sticky glue, and dangling them from the ceiling.

As you might expect, I’ve done some research, and found that the satirist Craig Brown wrote a frivolous piece for his column in the wretched Daily Mail: “Why I get a real buzz out of fly-paper”. Brown observes that flypaper is an effective means of stopping flies defecating on your custard slice, strawberry tart, etc, but that it’s unfashionable compared to alternatives such as electric flyswatters.

Sure enough, most shops don’t sell flypaper. My local convenience store, which has room for five kinds of hummus, sells fly spray but not flypaper. Like the perverse selection of pasta shapes – sometimes the only option is fusilli, the worst pasta shape – the availability of fly spray baffles me, because I don’t understand the appeal of spraying poison into the air. Brown writes:

Fly-sprays are always an option, of course, though whenever I use them they trap me in their fall-out: I look up towards the ceiling to check how many flies are spiralling to their deaths, and a great nuclear cloud of lavender-scented mist descends on my eyes, to a chorus of malicious chuckles from all the surviving flies.

Eventually, I found a retailer that retailed flypaper, and noticed that the most prominent language on the box was not English but German: 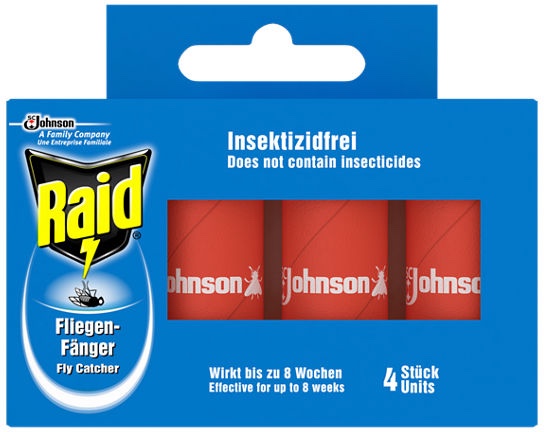 We’re so used to having special anglophone packaging, with foreign languages confined to small writing on the back – but apparently the English-speaking market for flypaper is too small. Meanwhile, German-speaking people seem to have more correct tastes in fly-extinction merchandise. (The Wikipedia article about fliegenfänger is a bit more detailed than the flypaper one.) Isn’t it interesting how different countries are different? Another difference being the use of elephant mascots by the paper towel industry.

Anyway, one of the readers’ comments on Brown’s article reads:

What a dull non story. 5 minutes of my life I’ll never get back.